LAS VEGAS/ROZVADOV, Czech Republic – October 25, 2016 – The World Series of Poker Europe (WSOPE) has found a new home for 2017 and the foreseeable future, signing a multi-year deal with King’s Casino Rozvadov to host numerous WSOP-branded events over the next several years.

After offering a Circuit event at King’s Casino Rozvadov in the Czech Republic in 2015, with another Circuit stop beginning this week, the World Series of Poker is determined to plant a flag in Rozvadov, Czech Republic to help King’s expedite their mission on becoming the most renowned tournament poker room in Europe.

Poker players are flocking to King’s from all over Europe for good reason. It has become the largest poker room in Europe – and is only growing bigger – and they are committed to a first class poker and player experience including a complimentary buffet. Currently boasting more than 150 poker tables, with cash games and tournaments running 24/7, the property is also in the midst of huge expansion, which will add a new hotel tower and more poker tables – all expected to be completed prior to the start of WSOP Europe in the Fall of 2017.

“I have really bought into Leon’s vision for creating a poker-first destination in Central Europe,” said WSOP Executive Director Ty Stewart. “The existing set up already reminds me of the Amazon Room at the Rio and it’s only going to get bigger. When the new hotel and the renovations are complete, and considering the way Leon and staff cater to poker players, this is going to be a very comfortable environment for a large festival such as ours. With King’s backing large guarantees and media coverage, we believe we have found a long term home for WSOPE to replicate the scale we enjoy in Las Vegas.”

This broad agreement is much more than WSOP Europe in 2017. WSOP and King’s have agreed to the following:

King’s Casino’s Leon Tsoukernik said:
“We are honored to be holding such prestigious WSOP bracelet events. By the time of the WSOPE next year people will discover an all-new version of the King’s Casino. Not only are we adding 1,800 square meters of Las Vegas-style casino space with 40 more poker tables, we are opening an amazing new hotel with 218 additional rooms. The first three floors of the new building will be a four-star hotel while the fourth floor will be a five-star one with 18 luxury suites to accommodate even the most demanding of guests. The last floor of the new complex will be home to a fully-equipped wellness center with Jacuzzis, saunas, massage rooms and a fitness center.”

“Last year alone, we brought over 250,000 poker players to Rozvadov. Although this is already a great result for a town of 500, I believe we will be able to double that number as soon as our plans for expansion are completed and people will get the opportunity to come here for a proper poker holiday,” he added.

Included in WSOP Europe events will be broad content distribution of the official gold bracelet events in 2017 and 2019. Each WSOP Europe Main Event will be filmed for television, with all other events receiving robust live reporting and live stream coverage.

King’s Casino Rozvadov is located in the Czech Republic, right near the German border, between Prague and Munich. In fact, the location is right in Central Europe, giving all Europeans an easy travel destination to play poker.

Many of poker’s brightest young stars have made King’s their home in recent years, including the German phenom Fedor Holz and 2016 November Niner Vojtech Ruzicka, who will be sporting a King’s Rozvadov patch at the WSOP Main Event final table in Las Vegas later this week.

Both King’s and the WSOP are hard at work planning the precise dates and event schedule for the 2017 WSOP Europe, and will announce details when they have been finalized. 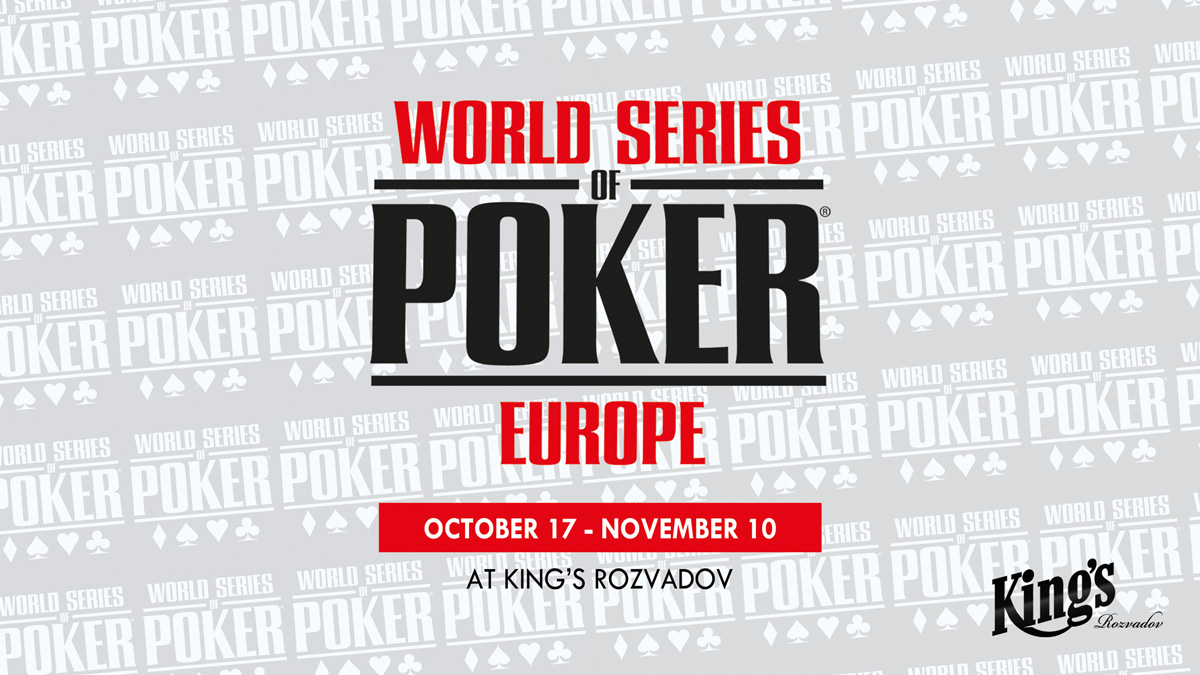 About the World Series of Poker

The World Series of Poker® is the largest, richest and most prestigious gaming event in the world, having awarded more than $2.4 billion in prize money and the prestigious gold bracelet, globally recognized as the sport’s top prize. Featuring a comprehensive slate of tournaments in every major poker variation, the WSOP is poker’s longest-running tournament in the world, dating back to 1970. In 2016, the event attracted 107,844 entrants from 107 different countries to the Rio All-Suite Hotel & Casino in Las Vegas, and awarded more than $221 million in prize money. In addition, the WSOP has formed groundbreaking alliances in broadcasting, digital media and corporate sponsorships, while successfully expanding the brand internationally with the advent of the World Series of Poker Europe in 2007 and the World Series of Poker Asia-Pacific in 2013. For more information on the World Series of Poker, please visit www.wsop.com.
Or
• Facebook: https://www.facebook.com/worldseriesofpoker
• YouTube: www.youtube.com/wsop
• Instagram: www.instagram.com/wsop/
• Twitter: www.twitter.com/wsop

King’s Casino Rozvadov, is well known for its range of games for players and for its famous customer focused service and hospitality. King’s Casino is Europe’s biggest poker room and situated roughly two hours’ drive from Prague and Munich. The venue offers everything a guest could want, including a full casino, two restaurants, three, four and five-star accommodation and great poker action 24/7.
By August 2017, people will discover an all new version of the King’s Casino with over 1,800 square meters of Las Vegas-style casino space added. A new hotel with 218 additional rooms, a new restaurant and a fully-equipped wellness center with jacuzzis, saunas, massage rooms and a fitness center will make Europe’s biggest poker room even bigger! There are a variety of accommodation options for players close to the casino. For reservations or any other questions please contact King’s directly via hotel@kingscasino.eu or call +420 374 616 050.

How to get to King’s Casino. Rozvadov, Czech Republic

By air: There are direct flights from just about every European capital to Prague (Czech Republic), Nuremberg airport (Germany) and Munich airport (Germany) – all around two hours’ drive from Rozvadov. Many budget airlines also operate regularly on these routes. US airlines commonly connect to Prague and Munich.

If customers have trouble getting to King’s Casino directly, there is a special shuttle service available. If you are travelling by plane they can pick you up at Prague, Nuremburg or Munich Airport. Call +420 374 616 050 or email shuttle@kingscasino.eu for more information.

By car from Prague: Simply drive via D5/E50.
By car from Munich: Get on to A9, A93 and then A6 to D5/E50.
King’s Casino has several parking areas under camera surveillance 24/7, and patrolled by a dedicated security team.
By train: The closest train stations are Nuremberg, Weiden, Wernberg, Regensburg or Amberg. Call or email King’s Casino and they will arrange a shuttle service: +420 374 616 050 or shuttle@kingscasino.eu.